TV Ad spending in the USA is expected to be $36 billion in 2014 or approx. 47% of all ad spending dominating all forms of media in terms of coverage and influence. But things are changing!

Michael Roth, CEO of Interpublic Group said that research shows that one-third of all Ad expenditures are currently allocated to digital. Their market intelligence predicts that more will be spent digital advertising than TV by 2017.

Last month during a WPP conference call with analysts, the holding company’s chief forecaster Adam Smith at WPP said, TV is not going to go like print “we are managing a transition. It’s more of a slow burn thing.” 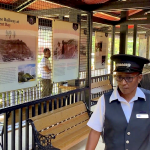 The Story of the Barbados Historic Railway Movie Writing this END_OF_DOCUMENT_TOKEN_TO_BE_REPLACED