Fred Wilson On The Death of Social Media and What Happened In 2014 – Business Insider. 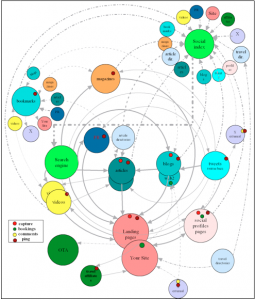 Fred Wilson, venture capitalist and renowned futurist when it comes to predicting winning technology, has a reason to be interested in the future of social media. He spotted the emergence of social media early and his firm, Union Square Ventures, invested in Twitter, Tumblr, Zynga, Foursquare, and others.

Today Wilson fears social media as we know it died in 2014. “Entrepreneurs and developers still build social applications,” says Wilson. “We still use them. But there isn’t much innovation here anymore. The big platforms are mature. Their place is secure.”

He believes that several new trends are now more important and key amongst these is Messaging apps. “Messaging and mobile moved into the enterprise in a big way in 2014.’ He says, and he points out that Facebook’s acquisition of WhatsApp defined this trend.”

He also goes on to say the “sharing economy” was outed as the “rental economy.” Amongst other disruptive trends he picks crowdfunding, mobile OS, xiaomi, video and he seems pretty down on the cloud as we enter 2015.

Source: Will Instagram let us shop for travel? | WTM END_OF_DOCUMENT_TOKEN_TO_BE_REPLACED