So What if Google Streams Apps 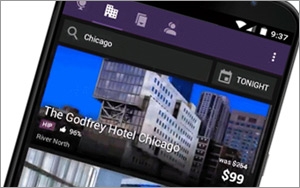 So what?  You may ask, what does it matter if Aps are streamed to browsers. Well it just may be a game changer for apps in travel.  Apparently Google is working with travel partners like HotelTonight to stream apps that are not installed on the users phone. This means apps can be browsed, which is the way online travel shoppers prefer to book anyway. See more about that at https://marketinghotelsandtourism.com/?p=3909.

“As part of the initiative Google calls “app-first content,” search query results will now return some details from within apps served on google.com. If someone searches for a hotel room in Los Angeles, for example, they will see details of hotel and room availability without having to go into the mobile application.

So lets look into the future and see where this might go:

Why native Apps may give way to Web Apps

1. Apps that can be streamed are less likely to be downloaded
2. In the future apps that don’t offer process and intelligent that cannot be streamed will have no advantage over web browsing
3. If the web browsing experience is equivalent to apps, travellers will prefer the web )- they already say they prefer to book on the web.
4. As web browsing gets more sophisticated, apps will be less novel.
5. Mass media may prefer web mobile over apps (see below)

Advertising and Apps
Streaming an app on the phone may stop or hinder any ad within the app. Tha will cut back ad funding for information and services that industry relies on. Also how then will the industry and Google, measure download and ad impressions. this could shake up the ad industry. Already TV shows are pushing ADs to mobile it seems logical that this will shift away from apps.

Although traditional TV ratings have continued to decline, viewership isn’t necessarily dropping, it’s just shifting. Nielsen rating now has a Total Audience Measurement solution, that will measure all viewing across TV, DVR, VOD, connected TV devices (Roku, Apple TV and Xbox), mobile, PC and tablets. Comscore is also taking its own shot at meassuring total audience. So it seems that TV and Mass media may be on apps and mobile web browsers and along with it Advertising. But an app can hide the fact that an ad is there. It makes it hard to measure and rank the ads effect. That is another reason why Aps may not be supported by mass media as they move to the mobile media.

A Spanish Treat Andalusia! Malaga and Sevilla- In this travelogue, END_OF_DOCUMENT_TOKEN_TO_BE_REPLACED

Plans for the reopening of global tourism vary as to END_OF_DOCUMENT_TOKEN_TO_BE_REPLACED