How Generation XYZ are Changing Travel 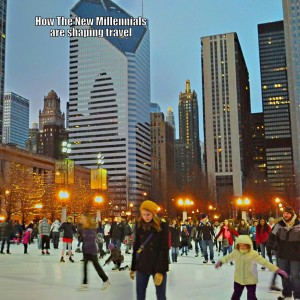 Understanding Millennials, Generation X to Z & How they are Changing Travel

There has been a lot of talk recently on how millenials are changing travels. They are the latest wave of the new generations that are now having a significant impact on tourism. Like impact-generations before them they bring a new set of ideals and behavior to the table. They are the generation Y. But to understand their place in history we need to go back to the Babby boomers.

This series of article is pieced together from several trends starting with a review of the impact of the new generations. The article is influenced by the blog on talenedtheads, and a lot more. Talendheads take us back to the Baby boomers and step through the generations that to understand how generation XYZ are changing travel.

Still to come is the next Generation when we will need to start the alphabet again. More details see http://www.talentedheads.com/2013/04/09/generation-confused/

Thais article also looks at what is playing out now because of these and related influences, namely government action to curtail OTAs and put hotels in a better position to compete.

The Baby Boomers are people like Steve Jobs, born just after World War 2 from during 1946 to 1964. After the war as western nations recovered from the economic turmoil of the war years, their was spike on birth and these new babies experienced formative years of economic growth and prosperity. They have influenced markets as affluent buyers and are now retiring with more wealth and spending power that all generations before them.

Born between 1980’s and the early years of 2000, are referred to as Gen Y, or the Millennials. They have been shaped by the technological revolution and the financial crisis. They are people like Adele and Kate Middleton, connected more that any generation before them. Many grew up seeing their Baby Boomer parents working long hours at corporate jobs and this has influenced their own views on life and work-life balance. >> millennials-strike-another-blow-to-otas

By 2015 Millennials will outgrow Baby Boomers in absolute numbers (U.S Census Bureau). That is there will be 75.3 million Millennials, VS.  74.9 million Boomers, and that will be the largest generation in the USA.

Born after the Year 2000, these are the children of Generation X and Generation Y and include Stars like Brooklyn Beckham. They are too new to have left their mark, and we can only speculate as to what will drive them and what impact on society they will have. But we know they will be living in a new age of advanced technology, a time of dramatic changes in applications and enhanced function and reality.  This is the generation that Wake up connected.

In our previous blog on the millennials we saw a dramatic shift to more frugal and independent shopping, with less reliance on online agents and a tendency to want different experiences, no more cooky cutter holidays and a preference to do it themselves and book direct with hotels as apposed to OTAs. This will set the stage for the travel industry of the future.

OTAs on the Chopping Block

We expect the rapid and universal access to information and application will make it easier to book direct and we fully expect that OTAs will loose their current mass appeal. The shift is even happening at political and national levels where governments are curtailing powers of the OTAs to create a more even playing field for hotels and tourism operations to compete direct.

The recent moves by Hotel associations worldwide have put pressure on Governments to legislate against OTAs demanding rate parity. The new legislation being put in place now will make it illegal for OTAs to insist that hotel cannot offer better prices than they have negotiated. As a result Expedia and others are forced to axe the programs and renegotiate with hotels.

It goes further saying that hotels must have control over the rates that OTAs offer. Often OTAs have used their special net costs and deep discounts to their advertized rates, sometimes below their costs, to create loss leaders. All this has put them into top spot on the best price radar. But that too is ending. It is a fine time for hotel to jump into the drivers seat.

The failure of Thomas Cook, a huge travel brand, should END_OF_DOCUMENT_TOKEN_TO_BE_REPLACED

In this article on “How BlockChain Can Radically Change Travel” END_OF_DOCUMENT_TOKEN_TO_BE_REPLACED