Set Your Televisions To ‘Engage’ | MediaPost

Interactive TV is on its way, not just the Internet on your TV set but real-time TV broadcast that let audience participate. NBC and others are already rolling out real-time interactivity!

“According to new GfK research, “Digital Media Players 2014,” one-third of owners have reduced or eliminated pay TV service because of other devices available. 19% of TV viewers now own at least one of the three major digital media players: Roku, Google’s Chromecast, or Apple TV, a 10-fold increase over the 2010 ownership level (2%).”

43% to 50% of digital media player owners use the digital devices in addition to their regular TV viewing, while (31% to 42%) that use them intead of the traditional TV. 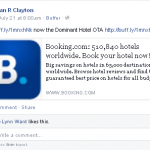