Travel Agent Use of GDS Growing More Than Any Other Booking Channel.

According to a Press Release by Travelclick, travel agents are using Global Distribution Systems (GDS) more than ever before.

The study conducted by market research firm Phoenix Marketing International in partnership with TravelClick, included over 650 agents from 34 countries. It showed GDS use was 14 percent more than 2011.

The study confirmed that GDS is expected to create 58 million hotel reservations, up 5 million from 2011.

Jason Ewell, Executive Vice President, business intelligence, media and web solutions for TravelClick pointed out the importance of this channel to hotels: “As key influencers in booking decisions, hotels need to merchandise themselves to travel agents at the point of sale through the GDS.”

The study showed that travel agents are booking promotional rates, special and best available rates as opposed to just relying on negotiated rates:

• Nearly 60 percent of travel agents surveyed said that they will book a hotel room based on best available or promotional message over any other factor.

• The number of travel agents offering their clients alternatives to negotiated rates increased 21 percent from 2011 to 2013.

In Conclusion Hotels need to add best rates and guarantee best rates on the GDS channel, those that do are winning the business with travel agents.
For More on GDS History see http://tourismencyclopedia.pbworks.com/w/page/22387557/GDS%20History 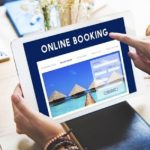