Is TripAdvisor Strategy on Shaky Ground

In this article by SeekingAlpha, LN Investors looks at the rise and pitfalls facing TripAdvisor from an investment and financial point of view. In terms of investment it concludes that TripAdvisor is “a more attractive stock than its direct competitors, Expedia (NASDAQ:EXPE) and Priceline (NASDAQ:PCLN)”.

Although TA began life as hotel review site is now a “one-stop shop” travel booking business. As LN says “Early investors must be ecstatic from the share price tripling from about $30 to as high as $110 within the first three years.”

Of course all this comes down to marketing! First by having a clear focus and delivering to that promise.  Now as TA moves into direct competition to its major partners we wonder how clear the focus is and if indeed it is not sabotaging its primary business for added growth and putting TripAdvisor Strategy on Shaky Ground.  Already the OTAs have barked and turned away form support of the TA booking app. But to be fair transaction based services are where the opportunities for TAs growth seem to be.  The authors tell us “The online travel reservations business is highly competitive. And for TripAdvisor to maintain its previous double-digit earnings growth it either has to expand its ad revenues or get more involved directly with hotel, flight and tour reservations.”

As LN says TA has to be careful as it moves forward to compete with the major customer who are the OTAs.”About 80% of the revenue comes from ads, 69% click-based and the other 10% from display. There’s nothing wrong with that. That’s actually why the company has been as successful as it is. Viewers come for the extensive reviews and holiday ideas, and TripAdvisor gets revenue for ads and referrals. Like many others, I myself have used the site to find interesting locations and good restaurants, and it is helpful because I get the viewpoint of fellow travelers and diners.”

But 46% of total revenue was from Priceline and Expedia in 2014. There is where TA has most vulnerability – Priceline and Expedia will not like when TA erodes their business with deals like it has with Marriott Hotel where it bypasses the OTAs altogether. These mammoth OTAs may well respond in ways that put “pressure on TripAdvisor and competition can become expensive.” 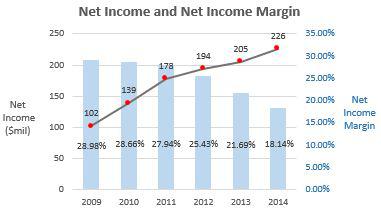 TripAdvisor’s profit margins are on the decline and net income margins has trended down since 2012. We can expect greater competition, higher operating costs and lower margins in the future, especially as TA grows its competitive booking and OTA type business.

The failure of Thomas Cook, a huge travel brand, should END_OF_DOCUMENT_TOKEN_TO_BE_REPLACED

Google Hotels, which used to be Google Hotel Finder and END_OF_DOCUMENT_TOKEN_TO_BE_REPLACED